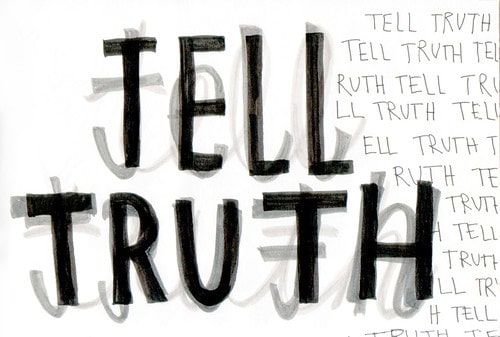 You might think the title above is trivial, especially when it comes to patients and doctors. But sadly, that’s not always the case. And the dishonesty can actually go either way it seems. Sometimes doctors are less than honest with their patients, and sometimes patients will not “allow” their doctor to be honest with them. Let’s look at these two situations individually, and then see how they work together at times, often with painfully undesireable results.

It is not all that difficult to figure out why doctors might be tempted to be less than completely honest with patients. Doctors are in business, quite literally, to sell their wares. So it might even seem understandable for a plastic surgeon to be “extra convincing” when making claims about what a marvelous cosmetic outcome he/she can deliver for an elective, often very expensive, procedure. But what about promises made by oncologists about the anticipated results from chemotherapy? Should cancer doctors be held to a higher standard than plastic surgeons? Most of us would offer a resounding “yes” to that question, but the answer in reality is often just the opposite.

Why? Because people paying for a facelift are true consumers, and if they are dissatisfied with an outcome from a procedure, they will complain about it, which could potentially harm the surgeon’s reputation. But cancer patients are not asking for elective medical care. They are fighting for their lives, and their expectations are much lower. Furthermore, many cancer patients almost insist on their doctor coming up with any sort of treatment plan once the standard treatments have failed, no matter how unlikely the chances are for success.

I have faced this dilemma countless times in my career, as have all oncologists. Regrettably, I have seen my colleagues quite often take the “low road.” By this I mean they eschew the opportunity to have a difficult, painfully honest conversation with the patient, pointing out the undeniable truth that further treatment is futile, risky, harmful and wasteful of their remaining quality time on Earth. Instead, they readily offer to pull some other drug off the shelf and give it to the patient, knowing all along that the chances of the medication working are virtually nil. Invariably, they defend their dubious behavior by saying, “The patient didn’t want to give up.”

In such cases, which happen every day in oncology clinics around the country, the patient and doctor are actually colluding with each other in an unspoken pact of mutual self-deception. And it’s a shame really, because it doesn’t have to be that way. What’s the alternative?

I do things differently in my practice, but not without paying a price professionally. I try very hard to tell my patients when the time has come to stop the fight. Some listen and die in peace with family and hospice at heir bedside. More than a few fire me, and go find another oncologist, who invariably gives them chemo, always to no avail.

But I cherish those long and difficult, painfully honesty conversations I have with my patients. I cherish the fact that I helped them die in peace at home with their loved ones at their side, rather than in the hospital.