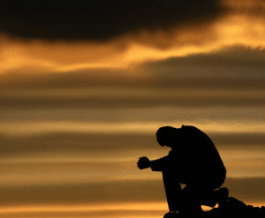 It is time now to talk frankly about the question of faith. By that I mean, is there really any question at all?

We are taught to “question everything…” Does that include faith? I am not talking about an academic discussion about whether or not Sodom and Gomorrah actually turned to stone. Nor is this a matter of revisiting the mistaken view of geocentrism. Factual details from a technically primitive world, or the meaning of ancient moralistic metaphors do not by themselves pertain to the central question: “are we divine creatures, endowed with an immortal soul?”

Such questions may pertain to religious history, or even to some academic elements of theology itself. But “the question of faith” is, in and of itself, purely an oxymoron. Faith in God, God in the broadest, most nonsectarian sense, is innate. It is the same as “faith” in self-awareness. Which is to say that such “faith” might be restated as “self-knowledge,” which is to say that it precedes analysis. It is primary to it. Analysis is derivative of self-awareness, not the other way around. So that asking the question, “Do I myself indeed exist?” is nonsensical,and merely arises out of a neurolinguistic confusion between primary and secondary knowledge.

Now here is the main thrust: the same is exactly and precisely true about faith. Faith in a personal divine nature can not be a question for analytical debate for the same reason as stated above regarding that of personal existence.

Because just as self-awareness precedes any analytical questions, thereto the reality of a divine nature must precede and supervene any analytical dissection on that matter. Why? Because analysis itself requires the ability to create abstract, i.e. non-material concepts, which cannot actually exist in a universe devoid of anything non-material. And a universe rife with non-material, i.e. spiritual entities, must so exist only by Divine Act.